In Torres Ferreras, we also join the women empowerment movement by designing a trophy for Women’s Equality actions, awards which are given by the association of cities called Campiña Sur Cordobesa (South Countryside villages in Cordoba). This is a fair cause we wanted to be part of from the very beginning. If we already like our job when designing exclusive pieces, we enjoy even more when the background of the work is empowering women.

Ithas been long time since we make these trophies, exclusively designed by ourselves for Mancomunidad Campiña Sur, the group of villages that our city La Rambla belongs to. Designing and making ceramics sculptures for trophies is one of our specialties, as you can check in our exclusive piece for the 1st Andalusian Trade Awards. 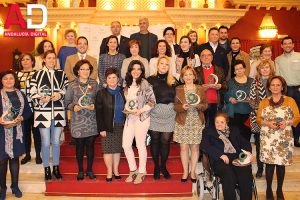 Besides, we like to know about the causes which are behind every trophy, and get involved in them at the time of creating our pieces. That is why when we are told to design pieces related to gender equality and rights of women, we could not enjoy more creating ceramics shapes while we think about all the wonderful women which surround us and make Torres Ferreras possible in some way. We also think about all those women who form the world of ceramics, they are many and we do not dare to say if even more than men because we do not have official figures. In ceramics from La Rambla, in fact, the role of women, related usually to the job of decorating the pots, is FUNDAMENTAL, NECESSARY AND INDISPENSABLE.

For the design of these trophies, the customer asked us to introduce the symbol of women. For the rest, we got inspired not only by the power of women but also by the workload they have in family, society, labour, sex or even as victims of violence. That is why, from the base of the piece of the symbol of women, another wave-shaped piece raises as a powerful wave, infiniten boundless, which falls on the head of the woman piece as a cargo that she still has to bear.

Every piece is handmade, unique and with its own process. Its own making process is a metaphore of women, as the drying process of these pieces is difficult and has to resist some kind of strain that makes us not know if they are finally going to get broken or the different pieces are going to tear appart and the wave shape will raise by itself in an attempt to be freed.

All the pieces are made in stoneware, handmade by clay plates, treated in the potter’s wheel. Finally, they are glazed only in the base and the women symbol piece. The wave shape remains in bisque, bare, pure, representing the women’s power which only women should decide how to use or transform.

From Torres Ferreras, we join this fair cause of women’s equality in every possible aspect of human life and we really hope we do not have to make a trohpy like this anymore some day, or giving them only as a symbolic action for an achieved goal. Come on women, We Can Do It!

Spanish Cheese Marqués del Valle is one of the best types of cheese in the northern region of Andalusia called Los Pedroches, which crafty making process goes back to traditional recipes from that rural area. And as we are craftmen too, they wanted to count on us to make their exclusive customized ceramics cheese plate.

We have had the honour of working with the cheese-maker Marqués del Valle family in the making of an exclusive cheese plate to be sold on their online shop and their several events. Yes, we have had the honour, the luck, however you want to name it… Do you know that feeling when someone you admire comes to you to ask for your advice, work or help? Well, that is something similar to what we felt when these cheese-maker masters visited us in our pottery studio in La Rambla to tell us that they wanted us to design and make customized cheese plates with their logo. This is one of the most common orders we receive: engraving different logos, brands or phrases on our design ceramics, as we could do for the Power bowls we made for restaurant ReComiendo in Cordoba.

How did we do it? First of all, these cheese artisans sent us their logo, of course. And even their logo was beautiful! A bit complex to handmake, but beautiful at the end. Miguel Angel Torres Ferreras started designing and making the cheese plates, with the required measures, on the potter’s wheel.

The main idea was that it had a traditional shape, but the material was a high-quality one, hard and resistant. That is why our high temperature stoneware was perfect both for keeping the cheese’ properties and for the maintaining the cheese plate in good conditions for a long time.

Once the cheese plates were handmade on the potter’s wheel and with a proper hardness, Luis Torres  drew the logo on every one of the cheese plates’ covers by hand and he incised every logo one by one with a punch. That is why there ir not one cheese plate the same as another, all of them are unique and genuine, as every Torres Ferreras piece is.

Finally, the glazes we decided to apply on these beautiful pots were two different ones, with two different concepts: one of them traditional and the other one more neutral and contemporary, so that these cheese plates were suitable for several environments and interior designs, from the minimalist decorations to the most rustic ones. In this way, we glazed this Marqués del Valle pots in our Mediterraneo and White collections.

As we see it, the result is more than satisfactory and the only thing we have left is asking you to go on Marques del Valle website and check not only their delightful types of cheese, but also our useful cheese plates 😉

Did you know that Pope Francis I had a ceramics holy chalice handmade in La Rambla, Cordoba, Spain? Now you know, and yes, we were the lucky ones who could make such an original order. 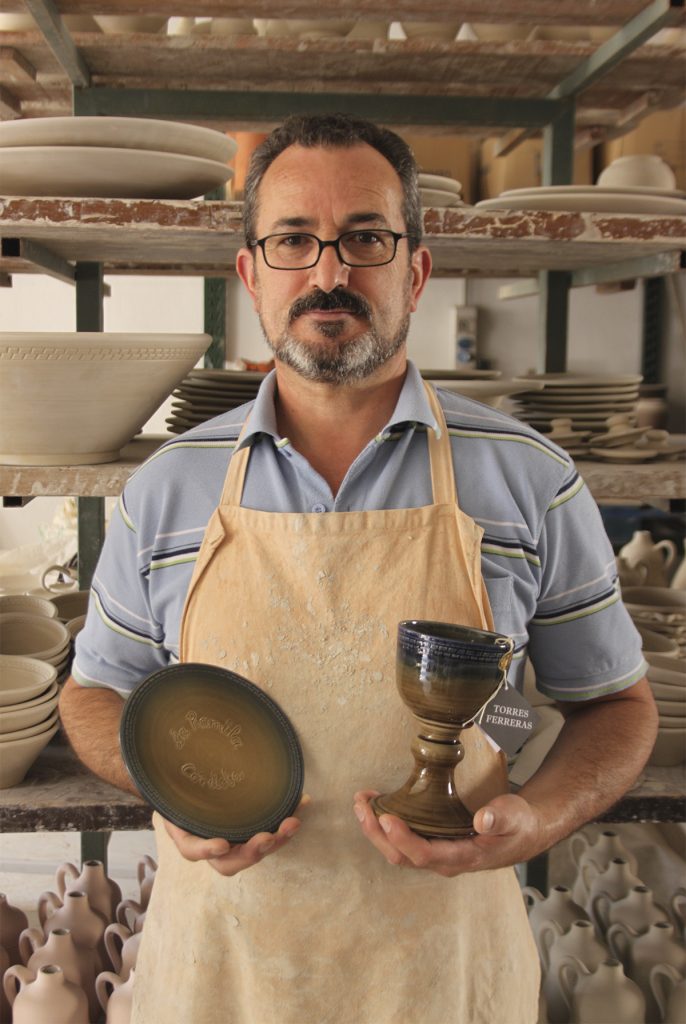 It was the summer of 2013, and the usual parish priest of our little “potters’ village”, La Rambla, was on holidays. Then, a substitute priest, called Father Christian, used to come directly from the Vatican in Rome, where he would go back every time he finished his temporary job in our town.

It was during a visit to the Ceramics Fair of La Rambla, Spain, now called ENBARRO, that Father Christian tought of giving Pope Francis I a handmade ceramics present from La Rambla. And this was just at the time he was standing and staring opposite our stand in that fair, talking to his companion, Rafael Luque, and our master artisan Miguel Angel Torres Ferreras. However, he did not have it clear what to take for the Pope. They soon came up with the idea of making an exclusive ceramics holy chalice, though. And this is how we got to work, or we could say, we got to our potter’s wheel. 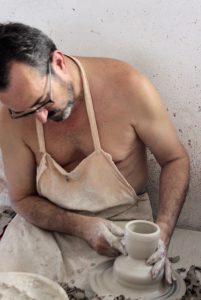 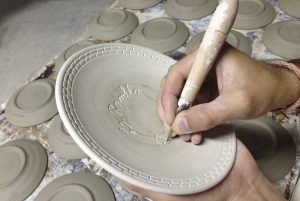 The result was a beautiful holy chalice with a small plate, on which we decided to carve the name of La Rambla out, by request of Father Christian too, we must say. Besides, with the purpose of letting the Pope know about our small village in Cordoba, Spain, we wrote and print a small leaflet about how his holy ceramics chalice was made, about Torres Ferreras and about the rich and long pottery tradition of La Rambla. Do you want to know what did we write on it? Well, you can have a look in the picture below, but you will need to know a bit of Spanish as Pope Francis I does: 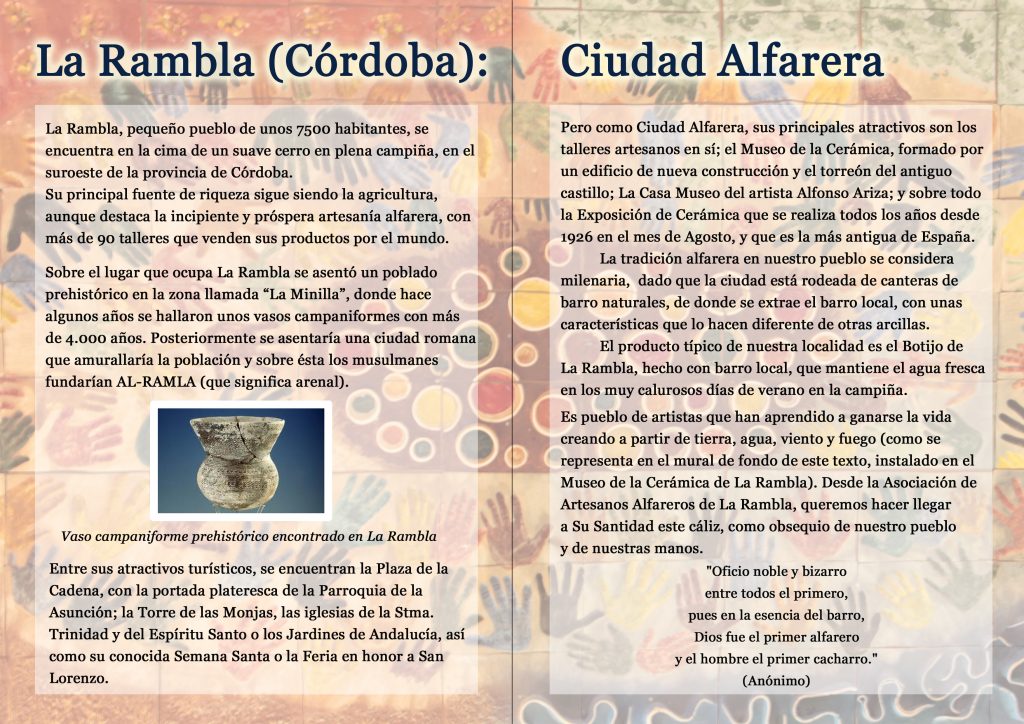 In the following summer, Father Christian came back to visit La Rambla and confirmed us that he gave Pope Francis his new ceramics holy chalice and, what’s more, he sent us a his appreciation by the following document: 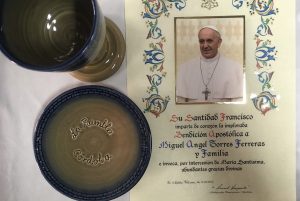 But in fact, it is us who want to thank Father Christian and Rafael Luque (from La Rambla) for trusting us in such an distinguished order! And, for all those who are reading us: you already know we dare to do anything you need so, in case you have any idea to tell us, do not even think about it twice and let us know!

Ah! And if you find this article interesting, share on your social networks so that everybody knows about it 😉

For the First Annual of Andalusian Trade Awards, the Regional Government of Andalusia wanted to count on several Andalusian craftmen for the design and manufacturing of different craft pieces which were used as trophies for the different prizes.

We were lucky for being chosen as one of the Andalusian artisan studios to perform one of these pieces, in concrete we had to design an exclusive piece as a trophy for the Award to a Town Council for its promotion of trade.

Well, our design consisted of an artistic and sculptural piece, formed by two main parts. First, the piece at the base is a map of Adalusia, with textures made by points in different sizes which are a symbol of the different town councils of our region, connected by a net of lines.

Second, there is a globe resting on the map of Andalusia, and the map of Europe is carved on this Earth globe. Sobre Andalucía se posa el globo terráqueo, sobre el que aparece el mapa de Europa hueco. The map pf Andalusia is projected from the base and goes out the space of Europe in a sculptural metephore which represents how Andalusia presents to itself and the rest of the world through its trade and regional products and produce.

Finally, this is just a proof of the wide variety of possibilities that ceramics have when it goes together with design and creativity.

Have you got any idea you think we can make it in ceramics? Just let us know! 😉